What is Yogadham? ‘Dham’ means ‘abode’ so Yoga+dham is the home of yoga. Yogadham was founded by Judith Richards back in the year 2000 when she set up her Iyengar yoga studio. It is now a cohort of Iyengar Yoga teachers based primarily in and around London and Surrey. We run online classes, and when COVID restrictions allow, we will resume our classes in local gyms, village halls, school halls and dedicated yoga studios.

Here is our current class timetable. All classes are on line at the moment until face to face classes can resume. Please contact the teacher for joining details.

Prices vary according to the class and are payable to the teacher (or venue) where you are attending. Please contact the teacher of the class you wish to attend for information about the class fees.

YOGADHAM IYENGAR YOGA will use the information you provide on this form to be in touch with you and to provide updates and marketing.

You can change your mind at any time by clicking the unsubscribe link in the footer of any email you receive from us, or by contacting us at yogadham223@gmail.com. We will treat your information with respect.

We use Mailchimp as our marketing platform. By clicking subscribe, you acknowledge that your information will be transferred to Mailchimp for processing. Learn more about Mailchimp's privacy practices here.

What is Iyengar Yoga?

Yoga is an ancient discipline which promotes mental and physical health and well being. You will learn movements to discover strength, suppleness and poise and to become at ease with your body and yourself. No special abilities are needed to start; many minor tensions, aches and pains will disappear.

The practice of Yoga has been around for about 6,000 years in India. The word 'Yoga' means union. It has the same root as the English word, yoke. The union referred to is the union of one's true self with the universal - in modern language - "to be at one with the world".

Iyengar yoga is the method of practising yoga developed by Mr BKS Iyengar. It is charactarised by precision and attention to detail. All aspects of yoga are incorporated into the way postures are performed, so that the student comes to his or her practice from a life of treating themselves and others well; in the correct alignment of each pose the natural breathing is enhanced and the student can become absorbed in the action so that a quiet, meditative state of mind is achieved. As in music, the richness, subtlety and depth of understanding which is possible in the study of Iyengar Yoga reveals itself through years of practice.

There is a long tradition in India of using yoga to cure or alleviate illness or injury. The body can be supported in positions which improve blood supply to organs, enhance the actions of nerves and glands, and put bones in the optimum position for healing. If you are unwell or in pain, don’t stop coming, but ask your teacher how to modify your practice to enhance your recovery. 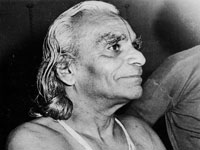 BKS Iyengar was born in India in 1918. Today his method is the most widely practised in the world. More that fifty countries have national Iyengar Yoga Associations to teach and promote his method and maintain his rigorous standards. IY(UK) is the oldest association in the world and has over a thousand teachers.

BKS Iyengar developed in himself an unsurpassed ability to observe the fine changes that are brought about by movements and the subtle mental and physical effects of each pose and each adjustment in each pose. He showed that the mental and spiritual effects which are the fruits of yoga can be attained by attending to the body and its actions.

Certified teachers of Iyengar yoga are required to maintain contact with Iyengar’s institute in Pune, Maharashtra, India, named after his late wife – the Ramamani Iyengar Memorial Yoga Institute (RIMYI) – and his senior teachers. They have an understanding of the body and posture work which is unequalled in other schools. All the teachers at Yogadham are fully qualified and certificated teachers of Iyengar Yoga.

Follow these links for more information about Yoga and the Iyengar method.

Mr Iyengar said ‘If you are going to use my name, you must use my method’. In the UK it is the organisation known as Iyengar Yoga (UK) Ltd - IY(UK) for short - (www.iyengaryoga.org.uk) who make sure that all Iyengar teachers are properly trained in the Iyengar method. Only teachers holding an Iyengar Yoga teaching certificate are licensed to use the Iyengar name and call themselves Iyengar yoga teachers.

If, after studying and practising Iyengar Yoga with a qualified teacher (Level 1 and above) for at least three years, you are interested in becoming a teacher, first talk to your regular teacher about being mentored. If your regular teacher is qualified (Level 2 teacher and above) and willing to be your mentor, she or he will guide you, over the next three years (or as long as it takes for you to be ready) in the art of teaching and in the knowledge of asana, pranayama and philosophy.

Your training will take place in your regular classes, along with some tutorials and specialist workshops. You will ned to be a member of IY(UK) and, with your mentor, register as a trainee when you start.

For class enquiries please contact the class teacher, or contact us via Sharon at yoga@easy.com or via Janette on 07774 796022